Step 1.)  Hold the Op-Yop with your index fingers through each of the finger rings.  Insert the tip of the finger up to the end of the first knuckle and then press your thumbs against your fingers closing any open gap to prevent the Op-yop from pulling loose while in use.

Step 2.)  Extend your forearms in front of you far enough away from your body to prevent the Op-Yop from striking you during winding.

Step 3.)  While keeping one wrist steady and rotating the other wrist begin to spin or twirl the Op-Yop 6-10 times to wind up the string. 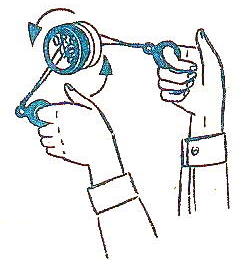 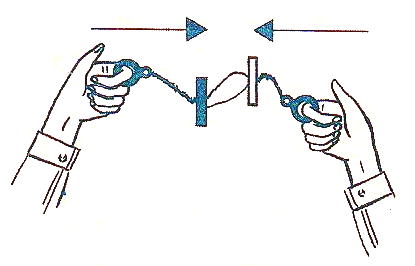 Step 6.)  Continuously repeat steps 4 and 5 reaching a smooth and steady cadence.  When the full effect is achieved, the two discs will strike each other producing a varying clip, clop, op, yop sound. You are now Op-Yopping.

For full enjoyment, practice this movement alternating between several fast pulls in a row and several slow pulls in a row to experience the different sounds the Op-Yop makes at different speeds.  Playing with the Op-Yop on a regular basis produces an isometric effect on the muscles, which can benefit the upper arm muscle tone.  A gentle, slower motion with the toy produces a calming, stress-relieving effect.